The telescope is a set of clusters. With respect to control, triggering and readout, each cluster can be considered as an independent detector of high-energy neutrinos. Such a structure allows adding new clusters without reconfiguring the whole telescope. A cluster consists of eight strings which hold optical modules (OM) detecting the Cherenkov radiation. These modules are grouped in sections. Each section contains 12 OMs and a master module of the section (SMM). Waveform signals from all the OMs of a section are sent to the correspondent master module via coaxial cables. Having been digitalized and timestamped the data are transferred to the cluster center which is connected to the shore station via optical cable. These chains are also utilized for remote control of the telescope as a whole and any of its modules — from the shore station or from anywhere through the Internet.

The work of all the clusters is precisely synchronized in time. Therefore particles showers or muon tracks in different clusters cfn be merged at the shore station. This allows for a combined fit of data from all involved clusters.

The peripheral strings of a cluster are 60 meters away from the central one. The vertical distance between optical modules along a string is 15 m. This configuration has been chosen  as result of a careful optimization process. It allows to detect both showers and muon tracks with high efficiency. The string with the optical modules are lowered into Lake Baikal from the ice cover, with the upper OMs at a depth of 700 m and the bottom OMs at a depth of 1240 m.

The strings are fixed at the lake’s bed by heavy anchors and boosted vertically by a bundle of buoys. Consequently a cluster is not a rigidly fixed system, but the strings can move to a certain extend. The position of each optical module is continuously monitored with the help of acoustic transmitters and sensors which form the acoustic positioning system. 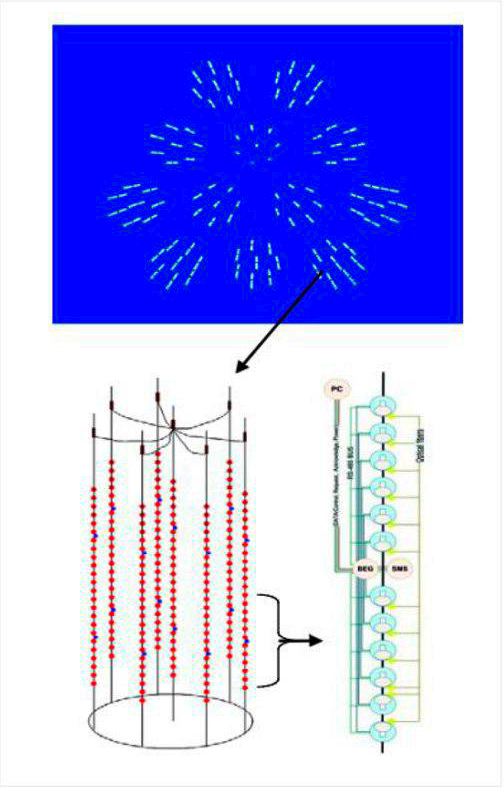